What Is a Green Roof?

You are here:
Kw Blogs 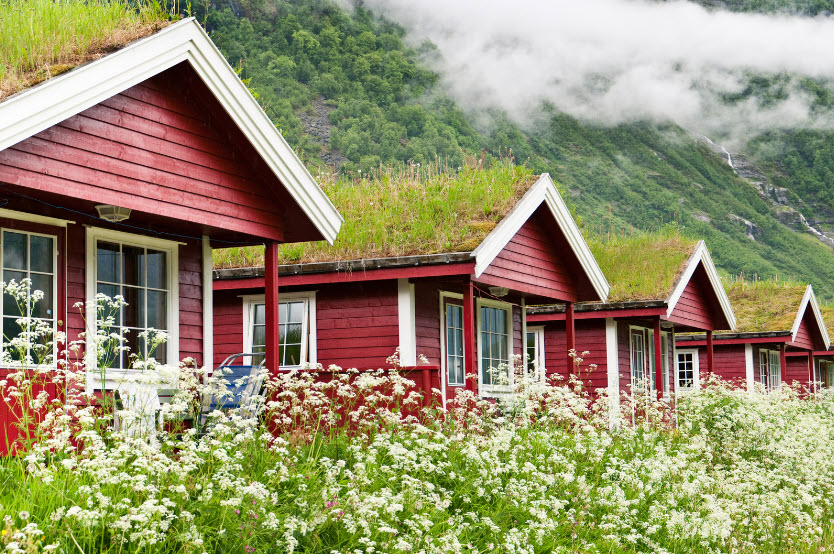 Green roofs are sprouting up everywhere, thanks to their aesthetics, sustainability and long-term cost savings. Is a living roof right for you?

Green roofs have been around at least since the time of the Vikings, who laid birch bark and sod on top of wooden boards to make their homes more draft-proof. Their modern incarnation began in 1960s Europe.

“Germany started looking at green roofs as a way to cut down on the spread of wildfires,” says Jim Mumford, president and resident horticulturist at Good Earth Plant Company in San Diego. “And then it came across the Atlantic.”

Today, Europe is still the leader in green roofs. But a number of U.S. cities are embracing the benefits, giving incentives to homeowners to install them. New York, Portland, Denver and Nashville require them in new construction of a certain size. Today, even the McDonald’s world headquarters in Chicago sports a fuzzy, green top.

“One of the things I really like about it is the addition of biodiversity,” says Mumford. “I’ve got milkweed all over mine, so I see butterflies all the time, and birds and bees. It’s a nice little wild spot.”

Whether you’ve been dreaming of a green roof for years or are just a little curious, here’s how to decide if a living roof is right for your home.

What Is a Green Roof?

Green roofs — also called living roofs, eco-roofs and vegetative roofs — feature plants growing on top of a man-made structure. They include a hefty waterproofing layer, soil or other growing medium, and usually a root barrier, plus drainage and irrigation systems.

“What we build most is what I call an eco-roof,” says Mumford. “It’s got four to six inches of soil and native plants, to use as little water as possible.”

Benefits of a Green Roof

Green roofs can be pricey, especially if you’re retrofitting your house to accommodate one. But if you have the means, they pay off economically, environmentally and aesthetically.

“I think the number one reason homeowners get them is the cool factor,” says Mumford. “Would I rather look at an ugly garage roof from my second-story bedroom window, or a green roof that’s obviously sustainable?”

Some other benefits of green roofs include:

Drawbacks of a Green Roof

“I think a homeowner actually has better roof maintenance as a result of us being up there on a semi frequent basis,” he says. “Otherwise, nobody goes on the roof.”

Where Can I Have A Green Roof?

“Pretty much anywhere but Antarctica,” says Mumford. However, depending on your location, it may be more complex. In dryer places, green roofs need irrigation. And in Florida, they must be designed to withstand hurricanes. They’re especially popular in the Northwest U.S. and Canada.

Does a Green Roof Have to Be Flat?

No. They need a slight slope so water doesn’t pool.

On pitched roofs they feature retention systems, although they typically aren’t installed on roofs with more than a 40 percent slope. “At some point, once the angle rises enough, it becomes a living wall instead,” says Mumford, laughing.

Can I Convert My Traditional Roof To a Green Roof?

Yes. But it’s probably going to be expensive because it requires adjusting your home’s structural load capacity.

A green roof with four inches of soil adds around 30 pounds per square foot when fully saturated. Don’t forget to factor in the costs of installing green-roof-specific waterproofing and hiring an engineer, as well as the green roof itself.

What Does a Green Roof Cost?

If your house is already engineered to accommodate a green roof, it’ll probably run from $30 to $50 per square foot to have one professionally installed. Costs can vary as widely as $20 to $200 per square foot, with the high end more likely for an apartment rooftop park with trees, walkways and seating.

Can I DIY a Green Roof?

Yes, especially on smaller structures like a shed. That’s if you have the patience for research and planning, plus a good set of construction and gardening skills. Plan on around $30 a square foot, says Mumford, which puts the total for an 8-ft. x 10-ft. shed at around $2,500.

“If you go for it, call me, maybe I can coach you through it,” he says.

Concerns to keep in mind:

Mumford recommends against DIYing anything as big as a garage.

“You really don’t want to risk your roof caving in,” he says. “It’s just too catastrophic. And you don’t want a leak. Fixing a leak on a green roof is pretty easy, but finding the leak is another story.”

What to Know About Polyaspartic Garage Floor Coating
July 7, 2022